Professor Sydney R. Hall, now Emeritus Professor at the University of Western Australia in Perth, Australia, through life-long leadership has resoundingly produced outstanding achievements in the world of scientific and technical data. His efforts have reached beyond crystallographic data and into many other science disciplines.

Sydney Hall received the Prize at SciDataCon 2014, the International Conference on Data Sharing and Integration for Global Sustainability, in New Delhi, 2-5 November 2014. This is the continuation of the CODATA Conference series, now co-organised with CODATA’s sister organisation, the ICSU World Data System.

On August 25, 2013, the University of Warwick (UK) hosted A Satellite Symposium to the 28th European Crystallographic Meeting, an event organised by COMCIFS, the IUCr Committee for the Maintenance of the CIF Standard, and to which CODATA gave its support as a sponsor and its participation in the workshop. 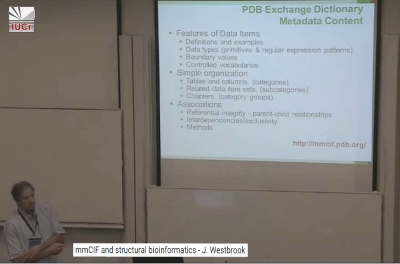 An important one-day Symposium to celebrate and develop the role of the CIF information exchange standard in crystallography: from diffraction images to structure solution, refinement, validation, publication and archiving. Speakers explained how crystallography, particularly in its application to structure determination, is a field with supremely well developed practices in the collection, analysis, interpretation, publication and archiving of raw and processed data, and the structural information derived from diffraction experiments. These practices are so well ingrained that many crystallographers are unaware of how well we do these things, compared with other scientific fields.

The Symposium reminded the crystallographic community of its great track record in data handling, and also anticipated further advances in data management, integration, validation and curation. Much of the community’s success in information management arises from the Crystallographic Information Framework (CIF), a standard now entering its third decade, developed originally for small-molecule structural modelling but which is now used directly in many areas of crystallography, or informs the development of formal data definitions in others. New developments in the CIF standard will maintain our position at the leading edge of scientific information characterisation and exchange.

During the second part of this event, focused on “Improving the management of experimental data”, Simon Hodson, Executive Director of CODATA, presented a key note about “Research data management and UK funding policies”.