The purpose of the CODATA Task Group on Fundamental Physical Constants is to periodically provide the scientific and technological communities with a self-consistent set of internationally recommended values of the basic constants and conversion factors of physics and chemistry based on all of the relevant data available at a given point in time.

The CODATA Task Group on Fundamental Physical Constants defines the policy for the treatment of data, especially discrepant data, to be used in the adjustment of the fundamental constants, addressing national, international, and diverse scientific interest.  The Task Group is internationally recognized as the authoritative body in the treatment of the data in recommending the values of the fundamental physical constants.  Our long-term goal is to retain this reputation.

The Task Group works closely with key cutting-edge research efforts that contribute to the collection of relevant data and with key committees such as the Consultative Committee of Units to determine the impact of recent results on the proposed redefinition of the SI.  The Task Group addresses the scientific objective of a better understanding of the basic theories and experimental methods of physics through the comparison of the values of the constants as obtained from widely differing experiments.

These periodic adjustments are major milestones of the Task Group’s activities and the Task Group will continue to prepare a new set of recommended values no less than every four years.

There will be an adjustment of the constants to provide the values for a revision of the International System of Units (SI) expected to take place in 2018. To be considered for use in this adjustment, new results must be accepted for publication by 1 July 2017.

The 2018 CODATA adjustment of the fundamental constants will be based on the revised SI, which will significantly affect the uncertainties of many constants. For data to be considered for use in this adjustment, they must be discussed in a publication preprint or a publication by 1 July 2018.

The Task Group’s commitment to producing a new least squares adjustment (LSA) of the fundamental constants on a four-year cycle incorporates all relevant data from diverse scientific interests and fields of research.   This function primarily provides the scientific and metrological communities the most consistent set of the values of the fundamental constants and conversion factors used in physics and chemistry.  Moreover, performing an analysis over a broad spectrum of experimental and theoretical information relevant to the constants has important value.  In general, such an analysis may uncover errors in theoretical calculations or experiments; it reevaluates uncertainties so that all are expressed in a consistent manner (i.e. standard uncertainties); it identifies inconsistencies among results and weaknesses in certain areas of research; it stimulates new experimental and theoretical work due to inconsistencies; and it summarizes a large amount of rather diverse information in one place.

These values contribute to the high profile of the Task Group’s LSA and the Group’s continued reputation as the authoritative source for the best determination of the fundamental constants.  The review articles of each LSA are very highly cited and contribute significantly to CODATA’s international reputation.  It is now universally accepted by all of the concerned groups that the Task Group’s recommended values will be used in the proposed changes of the International System of Units (SI).  These changes to the SI are the most profound in over a hundred years and this emphasizes the accumulated impact of the Task Group activities and promises to enshrine that contribution for generations to come.

In January 2018, a short summary paper and a detailed paper of the CODATA 2017 Special Ajustment of the fundamental constants for the exact values of the Planck constant h, the elementary charge e, the Boltzmann constant k, and the Avogadro constant NA to be considered for the new International System of Units (SI) were published: 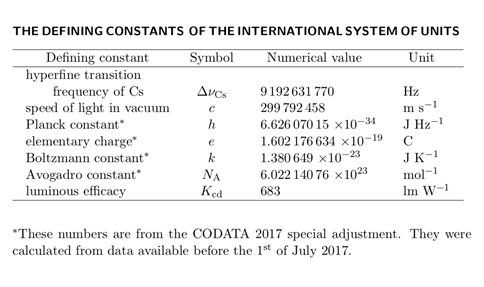 An invited presentation titled “The CODATA 2017 Special Adjustment for the revision of the SI” was given at the 2018 Conference for Precision Electromechanical Measurements (CPEM), 9 July, describing how these numbers were determined.  These values were adopted as the foundation of the SI by the 26th meeting of the General Conference on Weights and Measures (CGPM) on November 16, 2018 by a unanimous vote of the member states.

During the 2018 meeting of the TGFC held 7 July, 2018 at the Laboratoire national de métrologie et d’essais, Paris, France, the available data and analysis for the 2018 CODATA adjustment of the fundamental constants was discussed.  This was a unique adjustment for it was the first with the SI based of the defining constants.  The coding and analysis were heavily modified since many of the constants are now exact and others have much smaller uncertainties.  On World Metrology Day, 20 May, 2019, at 12:00 am local time Paris, France, the 2018 CODATA Adjustment of the Fundamental Constants within the new SI were posted on the NIST Fundamental Constants Data Center website:

By late June 2019, the 2018 CODATA adjustment ‘wallet cards’ were made available for distribution, with the front side showing the defining constants and a subset of fundamental constants with exact:

The 2019 TGFC meeting will be 7 October, before the 24th meeting of the Consultative Committee on Units (CCU) 8 – 9 October, 2019.  TGFC Co-chairs David Newell and Krzysztof Pachucki will present the 2018 CODATA adjustment of the fundamental constants to the CCU.

No major concerns.  The TGFC membership is transitioning to meet the new challenges of determining the best values and uncertainties of the fundamental constants in the revised SI – please see list of members below.  Past members Terry Quinn and Barry Taylor are now Emeritus status and we have added Randolf Pohl as a new member.  Randolf’s expertise on laser spectroscopy of hydrogenic and muonic systems as they relate to the determination of the proton radius and Rydberg constant are invaluable to us as we perform future adjustments of the fundamental constants and deal with the ‘proton radius puzzle.’

A slight challenge will be identifying the appropriate future venues for the TGFC meetings.  On odd years, the meetings have been held at the BIPM in conjunction with CCU meetings and this will continue.  On even years, the meetings have been associated with the CPEM conferences due to the importance of the electrical quantities, however this is no longer the case with the revised SI.  Venues that has been suggested are the International conference on Precision Physics of Simple Atomic Systems and the Internaitonal Conference on Precision Physics and Fundamental Physical Constants since they cover fields relevant to the constants that need to be determined in the revised SI.

The TGFC is presently preparing detailed review articles for Reviews of Modern Physics and Journal of Physical and Chemical Reference Data on the 2018 CODATA adjustment of the fundamental constants.