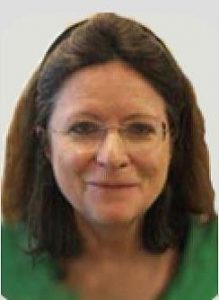 This is the seventeen in the series of short statements from candidates in the forthcoming CODATA Elections at the General Assembly to be held on 9-10 November in Gaborone, Botswana, following International Data Week. Virginia Murray Chuang is a candidate for the CODATA Executive Committee as an ordinary member. She was nominated by USA.

I qualified in medicine and joined Guy and St Thomas’s Hospital Poisons Unit and was appointed consultant medical toxicologist. In 1989 I started the Chemical Incident Research Programme and from 1995 was Director of the Chemical Incident Response Service. Here we supported emergency services and other partners for acute and chronic chemical incident response and developed evidence informed guidance for preparedness and incident management. In 2011 I was appointed as Head of Extreme Events and Health Protection, Public Health England and developed evidence base information and advice on flooding, heat, cold, volcanic ash, and other extreme weather and natural hazards events following being a first author of one of the chapters for the special IPCC report on extreme events and disasters [i] Currently I am  the Head of Global Disaster Risk Reduction (GDRR) for Public Health England, which has supported my role as a member and previous vice-chair of the UN International Strategy for Disaster Reduction (ISDR) Scientific and Technical Advisory Group from 2008-2017 where she was actively engaged in supporting the negotiations

Data is critical for the implementation of the recent synchronous adoption of the 2015 landmark UN agreements of the Sendai Framework for Disaster Risk Reduction 2015 – 2030[ii], the Sustainable Development Goals (SDGs) [iii], and the COP21’s Paris Climate Conference[iv]. It also imperative for the use of the WHO’s International Health Regulations 2005[v] and has created a rare but significant opportunity to build coherence across different but overlapping policy areas.  In my GDRR role  I have engaged with many science and technology partners in supporting the UNISDR STAG/ ICSU/IAP partnership to make the Sendia Framework for Disaster Risk Reduction 2015-2030 very reflective of data needs.

“Disaster risk reduction requires a multi-hazard approach and inclusive risk-informed decision-making based on the open exchange and dissemination of disaggregated data, including by sex, age and disability, as well as on easily accessible, up-to-date, comprehensible, science-based, non-sensitive risk information, complemented by traditional knowledge;”

When considered together, these frameworks make for a more complete agenda to build resilience and take action in areas including health, climate and disaster risk reduction.  This integrated thinking will serve to strengthen existing risk frameworks for multi hazard assessments and aim to develop a dynamic, local, preventive and adaptive urban governance system at global, national, and local levels.

To do this we need to measure and manage data. The frameworks must be ‘strengthened [by] effective implementation and monitoring’ calling for ‘a data revolution, rigorous accountability mechanisms and renewed global partnerships’.[vi]

The benchmarking of countries’ performance against indicators linked to global agreements is a powerful way to engage governments and mobilise resources—no country wants to fall behind.[vii]

During 2017, CODATA initiated and led a discussion with data science groups and international scientific unions and associations about the timeliness of a major initiative on interdisciplinary data integration.  Meetings at the ICSU HQ in Paris in June 2017 and at the Royal Society of London in November 2017 produced a report and communiqué supporting a long-term initiative and outlining some of the essential issues to be addressed.   The key priorities for this initiative are to address data integration in support of major global challenges and to develop relevant data capacities across all the disciplines of science.

The CODATA initiative on interdisciplinary data integration is seeking to explore these challenges and opportunities in relation to three specific case studies in interdisciplinary research: infectious disease outbreaks, disaster risk and resilient cities.  I am the lead for the disaster risk case study and work very closely wiht the infectious diseases and Resilient Cities programmes and 1 want to continue to advocate for the these case studies as we move into the development of this programme over the next three years – and these developments are best summarised in this figure below: 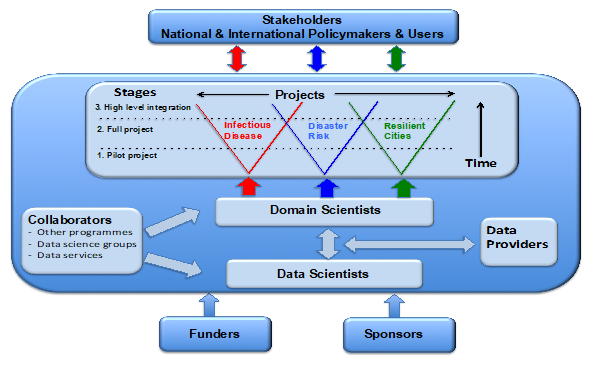 To me these case studies provide a concrete focus for exploring the potential of interoperability and data integration through metadata alignment via CODATA. The Interoperability of Metadata Standards in Cross-Domain Science, Health, and Social Science Applications  has shown that standards are a vital tool enabling integration and semantic linking of data within and between disciplines.

However, standards tend to get developed and adopted within disciplines or application domains with little consideration of cross-discipline requirements and technologies, so data integration can often only be easily achieved within and between closely allied fields. For example:

I believe the commitment to the delivery of these pilots would benefit from active CODATA executive committee engagement.

More widely my current roles include being a member of the Integrated Research on Disaster Risk (IRDR) scientific committee,  co-sponsored by the International Science Council (ISC) and the United Nations Office for Disaster Risk Reduction (UNISDR)  and Co-Chair of IRDR’s Disaster Loss Data (DATA),  and  currently co-chair of CODATA’s  Linked Open Data for Global Disaster Risk Research . I am a member the UNSDSN Data for Sustainable Development, co-chair of the recently developed WHO Thematic Platform Health and Disaster Risk Management Research Network  and a visiting/honorary Professor at several universities including University College London (2013) and at the United Nations University International Institute for Global Health  (2017)

[vi]    United Nations – The Road to Dignity by 2030: Ending Poverty, Transforming All Lives and Protecting the Planet Synthesis Report of the Secretary-General On the Post-2015 Agenda December 2014 http://www.un.org/disabilities/documents/reports/SG_Synthesis_Report_Road_to_Dignity_by_2030.pdf