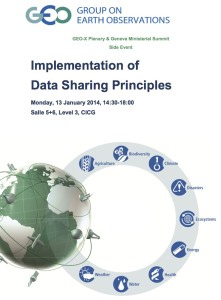 Last week at the 10th Plenary of GEO (the intergovernmental Group on Earth Observations), CODATA played a lead role in organizing a side event of the GEO Data Sharing Working Group (DSWG).  Entitled, Implementation of Data Sharing Principles, the side event had two principal aims: first, to showcase the progress, current activities and priorities of the DSWG; and second, to provide examples of how national, regional and international capacities for data sharing are being developed and extended.

It was notable during the week – and not just in the DSWG meeting and side event – that the GEO community views the advancement of data sharing as one of its tangible success areas.  GEO’s mission is to build an interoperable Global Earth Observation System of Systems (GEOSS) that will yield a broad range of societal benefits.  The availability of data shared by governments and participating organizations and programmes is fundamental to achieving this mission.  As the GEOSS Implementation Plan declares, ‘The societal benefits of Earth observations cannot be achieved without data sharing’. 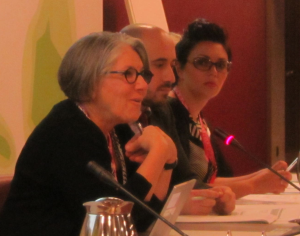 Nevertheless, as Barbara Ryan, GEO’s new Secretariat Director, remarked in opening the DSWG Side Event, much remains to be done.  The GEO Community and the DSWG should keep advocating for Open Data principles and practice.  It is also important for GEO to demonstrate the benefits of Open Data.  These can be economic: as Barbara observed in her recent TED-X talk, just the data underpinning a recent Spanish mapping and analysis of forestation would have cost more than 320M dollars if the US were still charging for LandSat data.  It is this type of benefit, she declared, that makes her passionate about data sharing issues.

Greg Withee, the U.S. co-chair of the DSWG, called for improved monitoring and evaluation of the use of GEO datasets, so that the benefits can be more easily demonstrated, and that the effect of restrictions can be analysed and understood.

The Open Data agenda has come a long way and its advocates have made considerable ground, witness the G8 Open Data Charter.  GEO and the DSWG need to move in step with such advances.  Indeed, as was argued by a number of speakers, GEO as a voluntary intergovernmental organisation is well positioned to advance Open Data approaches even further, for example, by building consensus and developing practical Open Data implementations.

Catherine Doldirina, of the European Commission’s Joint Research Centre, explored the challenge presented by the lack of ‘legal interoperability’.  Legal interoperability is inhibited when a restrictive license on a data input ‘infects’ an aggregated or derivative data product.  To avoid this problem, Catherine urged GEO Members and Participating Organisations to make datasets available with as few restrictions as possible.  Similarly, GEO needs to further promote the use of fully open and interoperable licenses.  She argued that GEO should adopt Open Data principles for the GEO Data-CORE and elevate this to the default standard of sharing data within GEOSS.  An ad hoc subgroup of the DSWG is exploring possible revisions to the GEO Data Sharing Principles for consideration by the GEO community, potentially including a more explicit endorsement of Open Data principles.

A highlight of the side event was a panel of 8 speakers on the issue of capacity building, organized and moderated by Robert Chen, one of the DSWG co-chairs and former CODATA Secretary-General. Some of the panel presentations focused on examples of new and emerging data policies to foster data sharing: e.g., that of the European Commission in the Horizon 2020 research programme; that of the EC’s Copernicus research programme; the Japan Aerospace Exploration Agency (JAXA) Data Policy for Earth Observations; proposed changes to the World Meteorological Organisation (WMO) Data Policy to encourage greater availability of data; and the Open Data initiative of the World Bank launched in 2010, which has led to a 10-fold increase in the use of World Bank data. DSWG co-chair Michel Schouppe of the EC reported that the Open Data requirements of Horizon 2020 are still being piloted but are now obligatory for some parts of the programme. Greg Scott of the United Nations Initiative on Global Geospatial Information Management (UN-GGIM) described a number of data sharing efforts in the geospatial community, including discussions with the International Bar Association about a proposed Convention on Geoinformation. 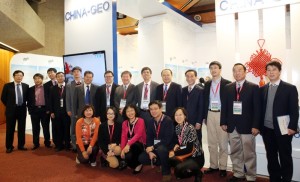 Chinese delegates at the ChinaGEO stand, with Liu Chuang (Chinese Academy of Sciences) in the centre of the front row. http://www.iisd.ca/geo/geox/17jan.html

Other panel presentations examined how data sharing principles are being put into practice at national and regional levels.  Liu Chuang of the Chinese Academy of Sciences (and past CODATA Prize winner) listed the recent contributions of China in this regard.  She also highlighted the work of the CODATA PASTD Task Group, which inter alia will be holding a major workshop in Nairobi, Kenya this summer to examine the implications and implementation of data sharing principles for developing countries. 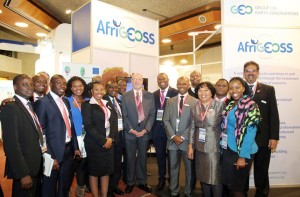 Derek Hanekom, South African Minister of Science and Technology, with GEO participants from Africa at the AfriGEOSS Stand http://www.iisd.ca/geo/geox/

The closing panel discussion focused on the challenge of incentivising Open Data.  The mandates of funded programmes are one thing, but even these only go so far.  More incentive needs to come from the downstream benefits – whether the direct economic benefit of third party services build on Open Data or the benefits to be achieved through addressing (for example) GEO’s Societal Benefit Areas on the basis of improved access to data, information and services.  As DSWG co-chair Paul Uhlir observes, quoted in a recent piece in SciDevNet, ‘Open data policies are much more economically generative than closed ones.’ 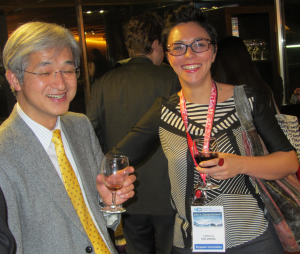 Recognising the important ongoing contributions of the GEO Data Sharing Working Group, CODATA was delighted not only to contribute to organizing the side event, but also to sponsor a reception (as it has in many previous GEO side events), enabling discussion and networking to continue over refreshments, wine and hors d’oeuvres. 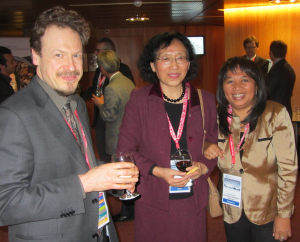 This blog post was written by Robert Chen and Simon Hodson.  Photo credits to Robert Chen where there is no link to the IISD Highlights Report.

One thought on “Implementation of Data Sharing Principles: GEO Side Event”