This is the eleventh in the series of short statements from candidates in the coming CODATA Elections at the General Assembly to be held on 15-16 November, 2021.  Ajit Kembhavi is a candidate for the CODATA Executive Committee as an Ordinary Member. He was nominated by India. 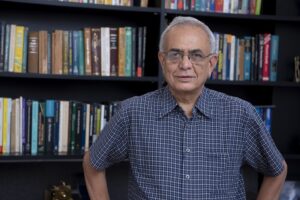 I am an astronomer.  I am an Emeritus Professor at the Inter-University Centre for Astronomy and Astrophysics (IUCAA) located in Pune, India.  I am a Founder-Member of IUCAA  and was Director there during  2009-15.  I have had to use data extensively in my profession as an astronomer.  Going beyond that, I have led various national and international projects on data management, analysis and visualisation.  I have been associated with some important astronomy data centres in the world including the Centre for Astronomical Data (CDS) in Strasbourg France where I was a member of the Scientific Council for three years and its Chair for six years.  I have also been the Chairperson of the International Virtual Observatory Alliance.

As an astronomer I have worked in projects which involved large volumes of data, in the form of catalogues, images and spectra.   I have used data extensively from original observations  as well as archives, and have used a variety of sophisticated data processing packages over four decades.  I have myself  developed packages for morphological analysis of galaxy images, and over recent years I have extensively used AI techniques in the analysis.

A major data related project I have been working on is Virtual Observatories (VO).  The VO were set up in several countries around 20 years ago, and are federated in the International Virtual Observatory  Alliance (IVOA), whose aim is to make astronomical data in all forms freely accessible to the astronomical community in an interoperable manner, along with tools for dealing with all aspects of the data.  I led the Virtual Observatory – India (VOI) project which has made valuable contributions to the international effort.  I was for two years the  Chair of the IVOA.  Another major funded project that I led in recent years involved providing data related services, including preparing archives and tools for astronomers and astronomy projects in India and South Africa, including the Office for Astronomy for Development of the International Astronomical Union in Cape Town.  As Chair of the Scientific  Council of the Astronomical Data Centre (CDS) in Strasbourg, which is the leading provider of archived astronomical data in the world, I was extensively involved in setting policies and programmes, and monitoring actions of all data related activities of the CDS and its personnel. I have been involved with data management matters for the Thirty Meter telescope project and the LIGO-India project.

I am presently the Principal Investigator of a major  project called the Pune Knowledge Cluster (PKC) which brings together the academia, R&D organisations and industries to work on projects for the betterment of the city of Pune and its surrounding regions, with focus on projects in environment, health, sustainable mobility and capacity building.  All the projects are data driven.  One of the major projects we are engaged in is on COVID-19 data.  We have obtained patient and clinical data on over half a million infected persons from the Pune region, as well data from genome sequencing being carried out on about 50,000 samples from infected persons.  We are engaged in producing databases and providing tools, with the aim to move to a large epidemiological database on a  variety of infectious diseases.

I am presently the Chair of the National CODATA Committee, through which we are bringing together  the scientific and technical community, from diverse domains, involved in large scale use of data.  We are carrying out various activities, which we hope will become more varied and inclusive as the restriction imposed by the pandemic are eased and free movement becomes possible.  We have been organising periodic webinars by experts on a variety of data related topics .