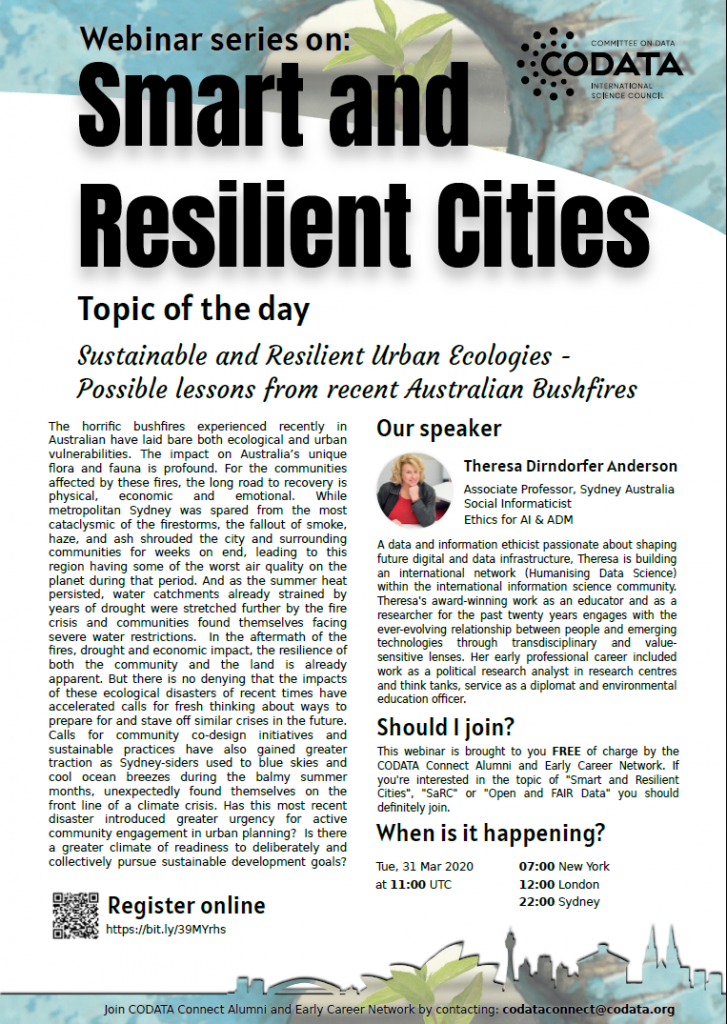 On 31st March 2020, a webinar titled “Sustainable and Resilient Urban Ecologies: Possible Lessons from Recent Australian Bushfires” was organized by the CODATA Connect Alumni and Early Career Network. Dr. Shaily Gandhi of the CODATA Connect introduced the speaker and theme of the webinar series. This was the first Webinar in the series on Smart and Resilient Cities, while other webinars are planned in the coming months throughout 2020. As introduced, the speaker Ms. Theresa Dirndorfer Anderson is a data and information ethicist passionate about shaping future digital and data infrastructures. Based in Sydney, Australia, she is an active contributor to local and international initiatives to humanize data science. Theresa’s award-winning work as an educator and as a researcher for the past twenty years engages with the ever-evolving relationship between people and emerging technologies through transdisciplinary and value-sensitive lenses. Her scholarly work involves the fundamental concepts of uncertainty, relevance and resilience. Before her academic career, Theresa worked as an analyst in research centres and think tanks. She has also worked as a diplomat and environmental education oﬃcer.

Theresa began her talk introducing the Sydney basin, its urban ecology and surrounding ecosystems. Located on the eastern coast, Sydney is the largest metropolitan city in Australia, accommodating about one-fifth of the country’s population. Australia is the sixth-largest country in the world but has third-lowest population density, just under three persons per square kilometer. Sydney’s urban boundary expanded rapidly in the last 100 years to accommodate the country’s growing population. The recent bushfires in the surrounding forests, national parks and peri-urban forests posed much higher risks and uncertainty to the city. Although the Sydney metropolitan area was spared from physical harm, the bushfires led to water stress, drought, a higher level of air pollution, warmer temperature, and other economical-ecological uncertainties to the local communities and city dwellers. Then the speaker talked about the city-level preparedness, resilience, community engagement, and compassionate behaviours of the local community in mitigating the sudden environmental hazards. There were significant instances of community members’ active involvement in the protection of distressed wildlife. Then the speaker presented the visions laid out in the City of Sydney’s Sustainable Sydney 2030 strategy and how the urban and regional communities re-evaluate the meaning of ‘sustainable’ and ‘resilient’ in the changing scenario. Theresa also described a new framework, named the Resilience, Adaptation Pathways and Transformation Approach (RAPTA), which is a guiding principle for designing, implementing, and assessing interventions for sustainable futures, as introduced by the Commonwealth Scientific and Industrial Research Organisation in Australia (CSIRO). The speaker presented a summary of lessons learned; namely, data is never complete, information never certain, but the action is still required; Indecision in light of the indeterminacy of information is a threat to the resilience of urban ecology; Building trust and mitigating risk critical to resilience; and Design WITH the city rather than FOR the city. She also discussed how data and information could play a significant role in tiding over the risks, vulnerability and uncertainties in extreme situations such as the Australian bushfires.

Mr. Felix Emeka Anyiam of the CODATA Connect Group moderated the Question and Answer session and was assigned to obtain questions from the online participants keyed into the webinar question handle.  Some of the questions were related to how the global community would be prepared to deal with such kind of huge risks, vulnerability, and uncertainties. The speaker emphasized community involvement while creating local and national preparedness plans. She mentioned that Data and information governance are also crucial to mitigate such conditions, and Data and information professionals should be handholding with the public policymakers, researchers, and development practitioners in creating sustainable urban futures across the world.

The session was concluded with a vote of thanks presented by Shaily. She also announced the forthcoming activities of the CODATA Connect, which include an Essay Writing Competition on “Open Data Challenges to Address Global and Societal Issues” for the CODATA alumni and early career professionals.