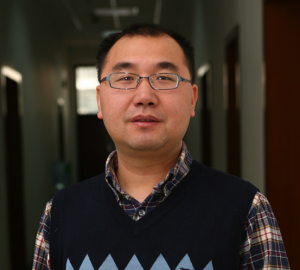 This is the eleventh in the series of short statements from candidates in the forthcoming CODATA Elections at the General Assembly to be held on 9-10 November in Gaborone, Botswana, following International Data Week. Jianhui LI is a candidate for the CODATA Executive Committee as a Vice President.  He was nominated by China, PASTD, LODGD, USA.

Dr. Jianhui Li is the department director of Computer Network information Center (CNIC), Chinese Academy of Sciences (CAS), a Professor and PhD Supervisor at the University of Chinese Academy of Sciences, an Ordinary Member of the Executive Committee of CODATA (2014-2016,2016-2018). He has worked on data infrastructure, data management and data-intensive computing since 1999, and has led the scientific data infrastructure development and open data activities in CAS for more than 10 years.

He has been always promoted the implementation of open data principles, data policies and put them into real practices as well. In 2017, He launched China’s first national-level large-scale survey on data sharing, which helped MOST formulate the first national policy on scientific data management and openness in China. To nourish a local data sharing culture among the Chinese research community, he launched a bilingual open-access data journal China Scientific Data (www.csdata.org), together with the data repository ScienceDB(http://www.sciencedb.cn). Moreover, he is a very active data scientist and leader in advancing the frontiers of data sciences. He is in charge of the development of the CAS Scientific Data Cloud for Big Data Analysis and Large Scale Data-Intensive Scientific Research. He is now leading the development of one scientific big data management system funded by the National Key R&D Plan, and serves as co-chair of the technology working group in the CASEarth Programme(http://www.casearth.com ) – a CAS Strategic Pioneer Research and Development Programme mainly focusing on building a global big data network to study Earth and support research on climate change, as well as to predict and mitigate natural disasters.

He has severed as Secretary General of CODATA-China for 10 years and organized a serial of successful international and domestic activities, including China-US Roundtable on Scientific Data, Training workshop for Developing Countries on Scientific Data, and National Scientific Data Conference. He initiated the International Training Workshop for Developing Countries on Scientific Data, sponsored jointly by CAS, CODATA and CODATA-CHINA. The training workshop has been held four times in 2012, 2014, 2016 and 2017, which attracted more than 80 participants from over 20 developing countries involved. The Annual National Scientific Data Conference is another event initiated in 2014 and now is the most important national academic conference on scientific data in China, providing a friendly platform for exploring the frontiers of data science and exchanging knowledge and experiences among thousands of scientists. He has been working as a member of CODATA EC since 2014, and making contributions for CODATA Strategy and its implementation.

With his extensive experience in national and international data activities and outstanding research on data science, scientific data management and sharing, he will continue to help CODATA carry out its mission, objectives and key initiatives as articulated in the Strategic Plan, especially make contributions on data policy, data management and data science.