The interim report and Action Plan are available from the Zenodo repository with the DOI-URLs below:

Consultation is being conducted on the interim report and Action Plan until 5 August 2018.  A commentable version of the report is available on Google Drive.  Structured comments on the Action Plan and specific recommendations and actions may be made via a dedicated GitHub repository.

The Expert Group will conduct webinars to support and facilitated the consutlation and these will be announced in due course.

About the Expert Group and the Report 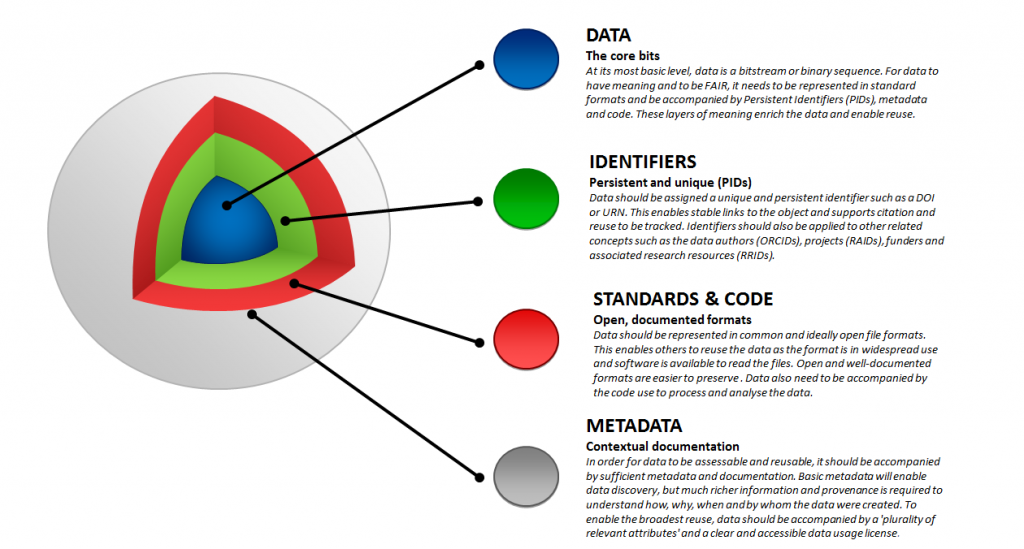 It is recognised that FAIR data (data that are Findable, Accessible, Interoperable and Reusable) play an essential role in the objectives of Open Science to improve and accelerate scientific research, to increase the engagement of society, and to contribute significantly to economic growth. Accordingly, ‘the Open Science agenda contains the ambition to make FAIR data sharing the default for scientific research by 2020.’ The overall objective of the European Commission Expert Group on Turning FAIR data into reality is to help operationalise and facilitate the achievement of this goal. 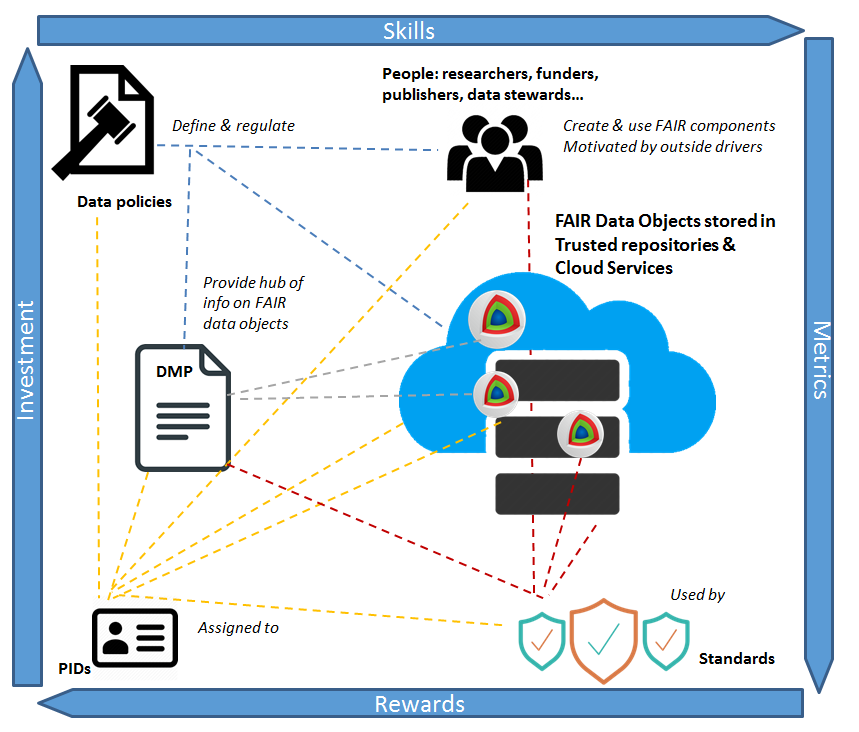 Rec. 4: Components of a FAIR data ecosystem
The realisation of FAIR data relies on, at minimum, the following essential components: policies, DMPs, identifiers, standards and repositories. There need to be registries cataloguing each component of the ecosystem and automated workflows between them.

To this end, this report that examines the FAIR data principles, considers other supporting concepts and discusses the changes necessary, as well as existing activities and stakeholders to make these interventions. Recommendations and actions are presented as an Action Plan for consideration by the Commission, Member States and leading stakeholders in the research and data communities.

It might have been possible to take a data centric point of view and to work through the FAIR principles slavishly or systematically (depending on your point of view) asking what needs to be done to achieve each one. The Expert Group decided at an early point that this would not be the most effective approach to our task. Rather we felt it was important to take a holistic and systemic approach and to describe the broader range of changes required to achieve FAIR data. It is hoped that what has emerged will be at one and the same time an Action Plan that will be immediately useful and a longer standing survey and discussion, providing a discursive framework for ongoing considerations of how to make FAIR data a reality.

Consultation is open on the interim report and Action Plan and we actively invite constructive feedback. Does the Action Plan highlight the correct priorities? Are the recommendations sound and the actions tangible and achievable? Are they presented in a way that will helpfully guide the stakeholders mentioned? Is the Action Plan sufficiently grounded in the discussions and arguments of the broader report? Given the way this particularly piece of marble has already been cut and carved, what still needs to be done to make a polished statue emerge?

Consultation on the interim report was launched at the EOSC summit on 11 June 2018 and initiated by means of a workshop at that meeting. It will be pursued by online means and by webinars until 5 August. A final version of the Report and Action Plan will be published at the Austrian Presidency event on 23 November.

The group has conducted its work by means of face-to-face and virtual meetings and a lot of asynchronous, collaborative work with the text. All members of the group have contributed substantively and substantially to the text. We hope that we have harnessed the strength and collective wisdom of the Expert Group, while minimising the flaws of group authorship. Our approach has been discursive and we have endeavoured to explore the arguments relating to FAIR in detail to identify the key steps needed for implementation. This is an iterative process and the final version of the report will present a more condensed argument.

The group has been chaired by Simon Hodson, CODATA Executive Director, with Sarah Jones, Associate Director of the Digital Curation Centre, as Rapporteur; but in effect the two have acted as co-chairs.

Membership of the Expert Group