This is the seventeen in the series of short statements from candidates in the forthcoming CODATA Elections. Eugene Eremchenko is a new candidate for the CODATA Executive Committee as an Ordinary Member.  He was nominated by WDS

The main area of interest of Eugene Eremchenko is in fundamental geospatial issues: new 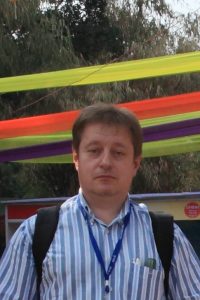 trends in cartography, the Situation Awareness concept, net-centricity, geospatial aspects of decision making, the theory of signs (semiotics). The new data era requires new methods in cartography and new ways of working with geodata. This belief is shared by many scientist. It is rightly called the the  ‘Geospatial Revolution’. The core concept of this revolution is that of the ‘Digital Earth’.

Eugene Eremchenko gave first intentional definition of Neogeography (2008), made first Russian open 3D-model of real cities (2005-2007). He formulated the paradox associated with the ‘signless’ perception of space (‘netcentricity paradox’, 2011)’ and proposed the concept of ‘zero sign’ for solving this paradox. Also he is one of co-authors of periodical tables of maps and methods of scientific visualization, as well as the concept of ‘superholography’ (2015-2016).

Eugene Eremchenko is the Head of Neogeography R&D Group (Protvino, Russia), a scientific researcher in Lomonosov Moscow State University (Moscow, Russia), scientific directior of Technopark Protvino (Protvino, Russia). Eugene Eremchenko is the secretary of the ICA commission ‘GIS for Sustainable Development’ (since 2015). He is an elected member of the council of the International Society for Digital Earth (ISDE) (since 2016) and co-chair of the Outreach Committee of ISDE. Also he is known in Russia as a popular geospatial blogger.