This post is a syndicated copy of the one at http://citingbytes.blogspot.co.uk/2016/07/3rd-learn-workshop-helsinki-june-2016.html and was written by Sarah Callaghan, Editor-in-Chief of the Data Science Journal 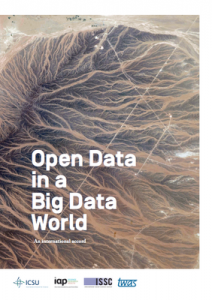 The 3rd LEARN (Leaders Activating Research Networks) workshop on Research Data Management, “Make research data management policies work” was held in Helsinki on Tuesday 28th June. I was invited wearing my CODATA hat (as Editor-in-Chief for the Data Science Journal) to give the closing keynote about the Science International Accord “Open Data in a Big Data World“.

The problem with doing closing talks is that so much of what I wanted to say had pretty much already been said by someone during the course of the day – sometimes even by me during the breakout sessions! Still, it was a really interesting workshop, with excellent discussion (despite the pall that Brexit cast over the coffee and lunchtime conversation – but that’s a topic for another time).

There were three breakout session possibilities, of which the timings meant that you could go to two of them.

I started with Group 3: Making possible and encouraging the reuse of data: incentives needed. This is my day job – taking data in from researchers, making it understandable and reusable, and figuring out ways to give them credit and rewards for doing so. And my group has been doing this for more than 2 decades, so I’m afraid I might have gone off on a bit of a rant. Regardless, we covered a lot, though mainly the old chestnuts of the promotion and tenure system being fixated on publications as the main academic output, the requirements for standards (especially for metadata – acknowledging just how difficult it would be to come up with a universal metadata standard applicable to all research data), and the fact that repositories can control (to a certain extent) the technology, but culture change still needs to happen. Though there were some positives on the culture change – I noted that journals are now pushing DOIs for data, and this has had an impact on people coming to us to get DOIs.

Next breakout group I went to was Group 1: Research Data services planning, implementation and governance. What surprised me in this session (maybe it shouldn’t have) was just how far advanced the UK is when it comes to research data management policies and the likes, in comparison to other countries. This did mean that me and my other UK colleagues did get quizzed a fair bit about our experiences, which made sense. I had a bit of a different perspective from most of the other attendees – being a discipline-specific repository means that we can pick and choose what data we take in, unlike institutional repositories, who have to be more general. On being asked about what other services we provide, I did manage to name-drop JASMIN, in the context of a UK infrastructure for data analysis and storage.

I think the key driver in the UK for getting research data management policies working was the Research Councils, and their policies, but also their willingness to stump up the cash to fund the work. A big push on institutional repositories was EPSRC’s putting the onus on research institutions to manage EPSRC-funded research data. But the increasing importance of data, and people’s increased interest in it, is coming from a wide range of drivers – funders, policies, journals, repositories, etc.

I understand that the talks and notes from the breakouts will be put up on the workshop website, but they’re not up as of the time of me writing this. You can find the slides from my talk here.