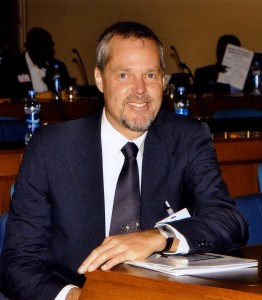 I had the privilege of representing the CODATA Global Roads Data Development Task Group at the recently completed Global Geospatial Conference (4-8 November) at the UN Economic Commission for Africa (UNECA) conference center in Addis Ababa, Ethiopia. The conference, which had about 500 participants, was organized by the Global Spatial Data Infrastructure Association (GSDI) and Environmental Information Systems for Africa (EIS-Africa).

A lot of talent from Africa was on display in the plenary and breakout sessions, with papers addressing land cover change, conflict prevention systems involving a combination of SMS text and geospatial technologies, geospatial education, and spatial data infrastructure development, among many other topics. Rwanda is one country that has made major investments in ICT and spatial data. Apparently each school in the country has at least one computer connected to the internet, and it is also the site of a geospatial reasoning education pilot test program with collaborators from Rochester Institute of Technology and the National University of Rwanda.

My primary purpose in attending was to make African colleagues aware of the availability of the Global Roads Open Access Data Set (gROADS) version 1 data release, which includes improved roads data for many countries in Africa, and to present work completed under the auspices of the Task Group on roads data development methodologies. These include the compilation of best available public domain data, digitization and semi-automated extraction of roads from remote sensing imagery, field based mapping using PDAs/smart phones and global positioning systems (GPSes), and crowd sourcing on the Internet. 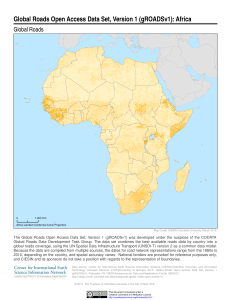 At the end of the presentation I made a pitch for open data, meaning data that is free of restrictions on dissemination and use. The paper was well received and further conversations with UNECA and others at the conference revealed additional roads data sources for a gROADS version 2. I was particularly gratified to learn that the Democratic Republic of Congo has put their entire roads data set online free of restrictions. In terms of follow up, colleagues at UNECA’s Geoinformation Section expressed interest in collaborating with the CODATA Task Group, and the task group will be following up on that and other leads for possible funding.

Geospatial data and technologies are evolving rapidly, and a number of major software companies held sessions describing new products. I attended all or part of sessions featuring Esri’s ArcGIS online, Google Map Engine, and Intergraph’s range of spatial products. After a plenary talk by a Google Maps representative, a national mapping agency (NMA) representative asked pointedly if there would still be a role for NMAs in the future. Later in the conference, Dave Coleman, the GSDI President, stated that much like people begin to think that eggs come from the supermarket, many also think that maps come from Google. But the reality is of course that those data still need to be produced somewhere, ensuring an important role for NMAs and other data developers.

Several talks and plenary presentations addressed the “mobile revolution”, in which map information is available on hand held devices and smart phones for use anywhere. Africa has bypassed the old style infrastructure of land lines, and now a surprising proportion of the population has cell phones and smart phones. A wide range of spatial data collection is now taking place on smart phones equipped with data entry software (such as that available from FormHub). Two countries in Africa – South Africa and Nigeria – also have remote sensing satellites. So these are exciting days indeed for data development in Africa.

Beyond the conference venue, I found myself reflecting on the dizzying pace of change in Addis and other major cities in Africa. The Chinese are building a new light rail system and residential and office blocks are rising everywhere. Conference presenters mentioned that African economies have among the most rapid rates of growth anywhere in the world and overseas investors are flocking there. Land grabbing for commercial agriculture is taking place in many countries, a relatively new phenomenon and one that promises to accelerate migration to the continent’s cities. I commented to more than one person that as a New Yorker, I feel like I am living in a sleepy backwater by comparison!

In closing, I would like to thank CODATA for the opportunity to travel to the conference, my Task Group colleagues Sives Govandar (EIS-Africa) and Harlan Onsrud (GSDI) for organizing an excellent conference, and our Ethiopian colleagues for their hospitality. A crowning moment was watching Harlan Onsrud break the ice at the closing banquet by perfectly mirroring the dance moves of a gyrating Ethiopian dancer. Before long everyone was on the dance floor enjoying themselves!